Welcome to CinCity Harley-Davidson. We are Cincinnati's oldest and largest Harley-Davidson® dealership and have been in business for over 100 years. That means experienced personnel to assist you with motorcycle sales, service, parts and accessories suggestions, knowledgeable sales associates, and MotorClothes® merchandise consultants to make your experience one you will not soon forget.

Being in the center of the tri-state, CinCity Harley-Davidson provides convenient access off both Interstate I-75 and I-71, by taking the Norwood exit, proceeding south on Reading Road and a quick left onto Tennessee Avenue.

CinCity Harley-Davidson has a great selection of new and pre-owed motorcycles, parts and accessories, MotorClothes® apparel and everything the Harley® enthusiast can dream about. We make your shopping experience a pleasant and entertaining one.

CinCity Harley-Davidson is open for business Monday through Saturday from10:00AM until 7:00PM. Sunday we are open from 11:00AM through 5:00PM. Contact us at (513) 641-1188 or on the web at www.harley-davidsonofcinncinnati.com. We look forward to seeing you and experiencing all our superstore has to offer at CinCity Harley-Davidson. 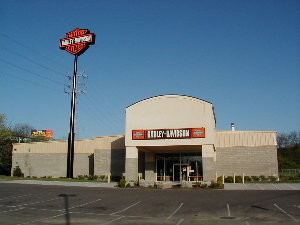 The dealership was founded in the teens and operated in downtown Cincinnati. It later moved to Central Parkway and operated from that location until 1963. At that time it was forced to make way for the Bureau of Employment Services Building that still occupies the site. The dealership then moved into a new building at 1375 Tennessee Ave. where it operated until August of 1999. At that time Harley-Davidson® Of Cincinnati, Ohio, Inc. operated from two adjoining buildings totalling perhaps 7500 square feet. Sales results and Harley-Davidson® Company's management dictated a newer, larger, and more modern facility so we moved into our newly constructed 30,000 plus square foot facility in August of 1999.

Ray Konkler was the dealer from the 1930's until his death in May of 1978. In 1953, a young man named Robert Cobbe joined the dealership in parts counter sales and went on to become the General Manager, a position he still occupies. In early 2003 Harley-Davidson&ref; Motor Co. recognized Bob for 50 years of loyal service to the company, to former dealer Ray Konkler, and from 1978 to December of 2004 with Ferd and Thelma Meinor, and now with owners Robert Nolan and Greg Stith.

The owners of CinCity Harley-Davidson, Robert Nolan and Greg Stith, would like to take this opportunity to invite each of you to visit our dealership and experience first hand the buzz surrounding the "American Icon". With Harley-Davidson's&ref; expanded product, we're certain the right motorcycle is just screamin' for you to join the ever-growing family of proud Harley&ref; bike owners and riders.